Tuscan villages not to be missed in Valdelsa

The historical tuscan towns of Valdelsa not to be missed are all easily accessible by day-trips from Villa le Ripe.

The most famous and interesting tuscan villages are Certaldo, Volterra, San Gimignano and Monteriggioni.

The first tuscan town not to be missed is only 10 km from Villa le Ripe. Certaldo is a historical town that is characteristic of medieval Tuscany and is famous for having been a favorite destination of Giovanni Boccaccio, who wrote about it in his “Decameron”: “as you may have heard, Certaldo is a small town in the Valdelsa, and although it is small, it was in the past inhabited by noblemen and wealthy families.” (decameron vi,10).

The name comes from latin, Cirrus Altus, or from german, Cirrus Aldo, which refers to the large covering of cerri trees over which the city has developed. The ancient village, called castle, is inside the walls which also preserve the three main access doors: Porta Alberti, Porta al Sole and Porta al Rivellino. An interesting feature of the town is the lack of a main square, where religious, political, civil and commercial powers usually took place. this function was assumed by the current via Boccaccio. 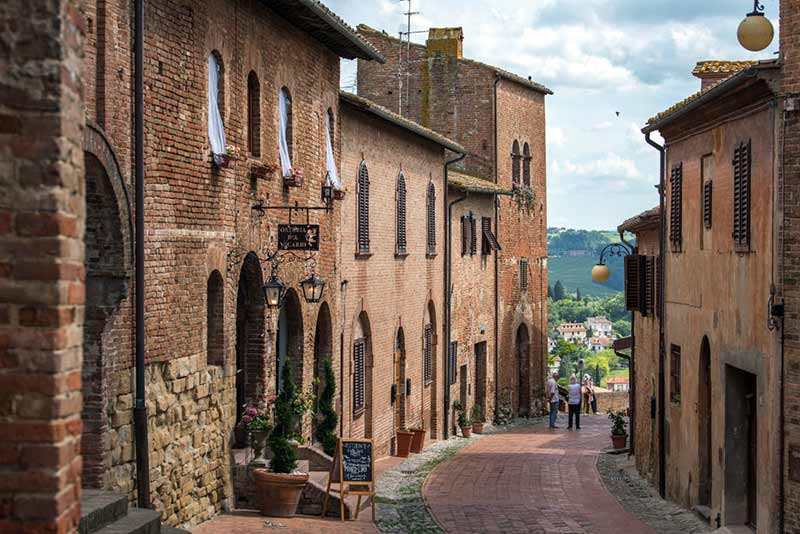 Another tuscan village not to be missed is San Gimignano, also known as “the city of towers”. It is a charming medieval village and Unesco world heritage site, less than 20 km from Villa le Ripe. Its characteristic profile is dominated by its thirteen medieval tower houses dating from between the 7th – 8th century, the period of the greatest splendor of the city.

The town is contained by walls built in the thirteenth century, protecting the integrity of the historic center. Entering San Gimignano is a walk through time: the medieval architecture of the old town is entirely preserved. You will thus find fantastic stone-paved streets, historic buildings, beautiful romanesque churches, and the two main squares: Piazza Duomo and Piazza della Cisterna.

The Basilica of Santa Maria Assunta, founded around 1000 a.d., is definitely worth a visit. The interior of the basilica is adorned entirely by frescoes. of particular importance are the cycle of frescoes of the stories of the new testament, painted by the school of Simone Martini, and Jacopo della Quercia’s two wooden statues, depicting the announcing angel Gabriel, and the announced Virgin Mary. 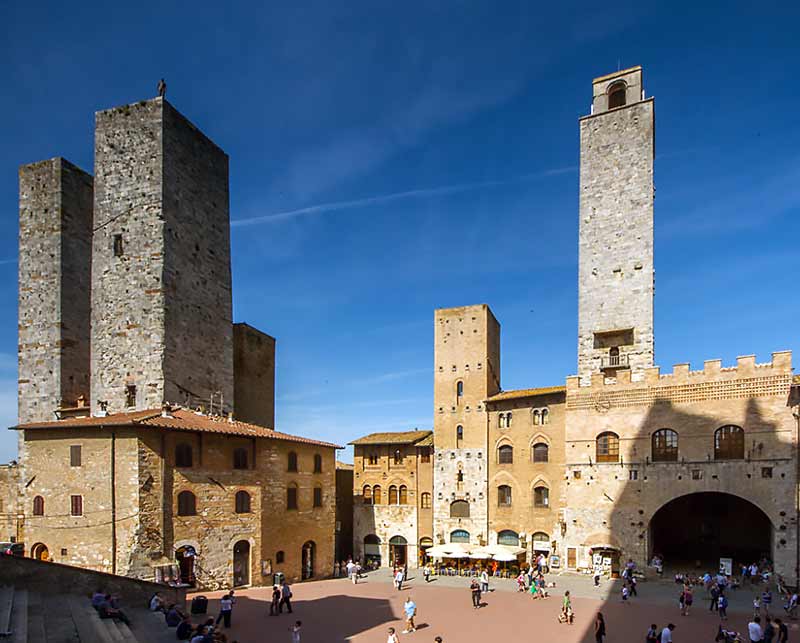 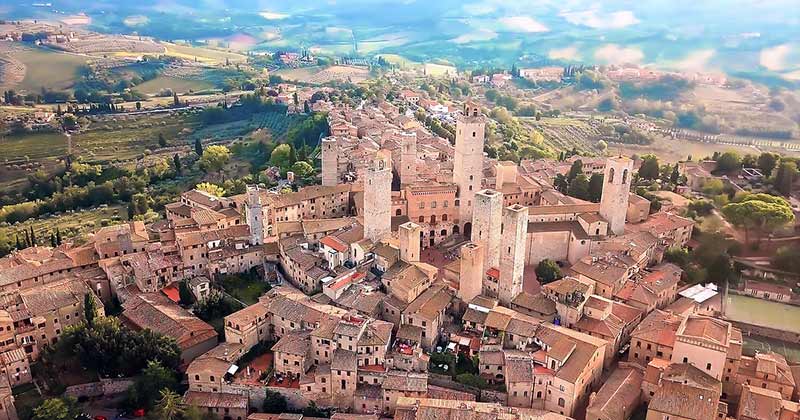 If you have the entire day at your disposal, don’t miss the opportunity to visit some of the city’s museums, especially the complex of Civic Museums housed in the historic town hall. The museum contains memmo of Filippuccio’s cycle of frescoes and Filippino Lippi and Benozzo Gozzoli’s masterpieces.

A trip to San Gimignano is not complete without tasting the gastronomic specialties that have made it world famous: wine, oil, and saffron, a unique and very precious cultivation. the most important wine is certainly the Vernaccia di San Gimignano (docg), with its classic straw-yellow color and fruity notes. other renowned wines produced on site are the red of San Gimignano, the rosé, and vin santo.

Another tuscan village not to be missed is Monteriggioni, located about 38 kilometers from Villa le Ripe. It is one of the oldest medieval villages in Italy, and was named by the great poet dante in the Divine Comedy.

The town still has the typical characteristics of the ancient village built between 1213 and 1219 by the sienese as a defensive barrier against the florentines. It was placed on the top of the hill to control the territory of Valdelsa and the old via Francigena. the town is defined by the castle, built from the repubblic of siena as a defensive outpost against florence, surrounded by a long wall that includes 14 towers and 2 doors which dominate the sienese territory. The town displays the original structure so it is possible to visit the ancient walls through an elevated walkway, and the ancient church of Santa Maria Assunta which although very small, acts as the fulcrum of the village.

The medieval tradition lives on in a place frozen in time with themed parties and events centered around food and wine, typical elements of the area. It is a very lively place, known worldwide by actors and artists, and visited by more than 70,000 tourists each year.

Another tuscan village not to be missed is Volterra. Less than 30km from Villa le Ripe, it is the perfect destination for a trip combining nature, culture, art, and good food. Volterra is located in a rolling landscape of great natural and geological interest.  its evaporiti hills are among its most famous.

Volterra is known as the city of alabaster. Thanks to the extraction and processing of this rock from the surrounding hills, it has remained a staple product of this city for centuries. 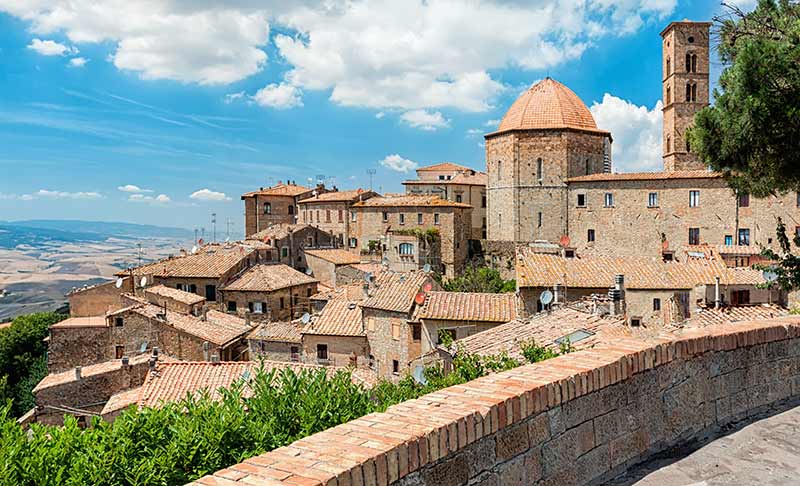 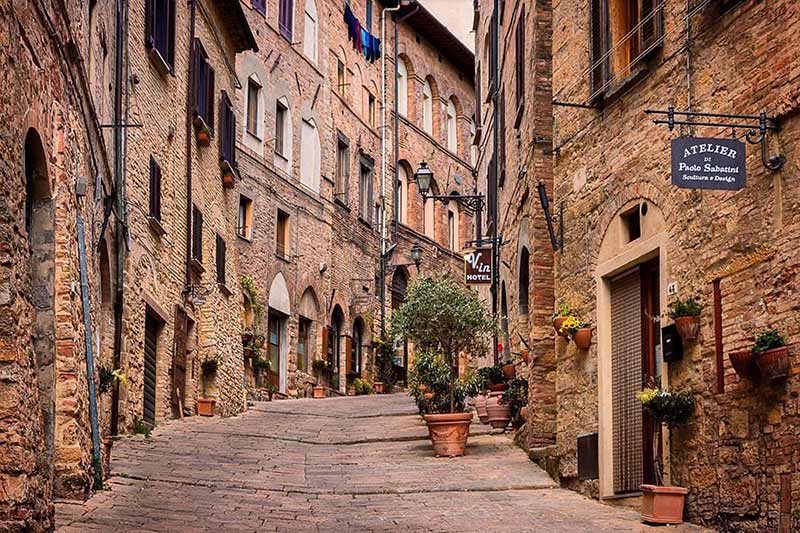 The historical center is enclosed within the walls which are of etruscan origin. the walls contain nine doors and form the basis for which the Medici fortress was built upon. Walking inside the city walls, the numerous monuments and buildings bear witness to the rich history of Volterra, such as the palaces, the religious buildings (of which there are more than twenty), the keep, and the theatre.

The Volterra cathedral is the most famous monument of the town. It was built in romanesque style, with successive alterations ( the interior is mannerist ). The oldest piece inside the church is the famous wooden sculpture of the deposition.

Archaeology lovers will surely not be disappointed: in Volterra there is still a well-preserved roman theatre, excavated only in the middle of the last century.

In Volterra you will find many remarkable ancient artifacts, shown in different museums around the city. In particular, a collection of etruscan funeral urns is housed in the etruscan archaeological museum “guarnacci”, where you can also find the sarcophagus known as “coperchio degli sposi” and admire “l’ombra della sera”, a famous small bronze statue, which is the highlight of the collection. For those who are interested in medieval and reinassance art, a visit to the art gallery is highly recommended, where masterpieces of the renaissance, such as “la deposizione dalla croce” of Rosso Fiorentino, are shown.

Shopping lovers can find a rich network of boutiques specializing in alabaster processing, where unique pieces, for all tastes and price ranges, are created. 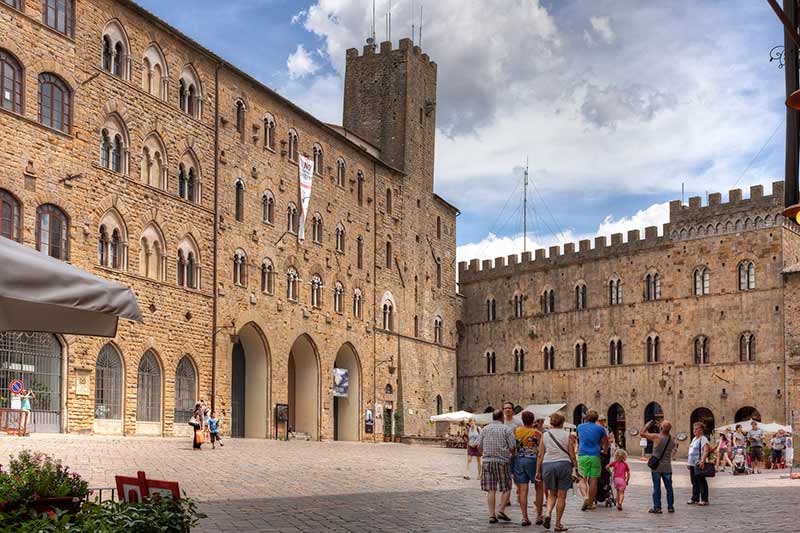